There are only two weeks left until I ride to support Multiple Sclerosis. I am riding the 95 mile route this year and would appreciate any support you can give. Just click below where it says Donate To Me.
Thank you!

Welcome to My Personal Page

Welcome to my Personal Page

Multiple sclerosis affects millions of people, including our loved ones, families, friends and co-workers. That’s why I’ve registered for Bike MS. Bike MS is a ride that brings us together to make a difference in the lives of people affected by multiple sclerosis…  and each mile we ride brings us closer to a world free of MS.

I am asking you to support me in Bike MS because this cause is meaningful to me. Multiple sclerosis is an unpredictable, often disabling, disease of the central nervous system that interrupts the flow of information within the brain, and between the brain and body. Millions of people are affected by MS and the challenges of living with its unpredictable symptoms, which range from numbness and tingling to blindness and paralysis. The progress, severity and specific symptoms of MS in any one person cannot yet be predicted, but advances in research and treatment are moving us closer to a world free of MS.

Currently there is no cure for MS. The money that is raised will be used to find the cause, treatment, and ultimately the cure for multiple sclerosis. The money is also used to provide education, information, direct financial support, and scholarships to individuals and families living with MS.

Please join me in the movement to do something about multiple sclerosis now!

Views and opinions expressed by third parties placing material on this page are not necessarily representative of the views of the National MS Society. If you feel this page contains objectionable content, or you have a technical concern, please contact the system administrator of this chapter. Be sure to include as much information as possible.

I just finished and passed my WLS exam, and am now a Certified Weight Loss Specialist through the N.A.S.M. This helps me deal with physiological and psychological issues that clients may experience, and are associated with weight loss.
A major part of keeping my certification current as a Certified Personal Trainer is continuing education. Personal trainers do NOT have to be certified in all states, and Ohio is one of them. I would not let just anyone teach me proper self defense, exercise, investing, or any number of skills simply because they can. My life, money, time, and body are valuable.

This is an interesting article. The most important part is the fact that trans fats have no positives.

Trans fats may play havoc with your memory along with your cholesterol levels, a new study suggests.

In the study, each gram of trans fats eaten per day was associated with 12 to 21 fewer words recalled, out of an average score of 86, said lead author Dr. Beatrice Golomb, a professor of family and preventive medicine at the University of California, San Diego School of Medicine.

“It’s a pretty sizeable relationship,” Golomb said. “This adds to a body of evidence that trans fats are not something that people should be sticking in their mouth.”

But, it’s important to note that the study wasn’t designed to definitively prove a cause-and-effect relationship; it…

The Truth About Fat-Heavy Diets

Headlines scream about fat-loading for endurance, butter-drenched “bulletproof coffee,” and how bacon is good for you, but here are four truths that you really need to know.

This article appeared in the June edition of; The Training Edge, a publication by N.A.S.M. This is neither for or against a fat heavy diet, but raises a rational awareness.

1. It’s easy to overdo it.
“A gram of fat has nine calories, while carbohydrates and protein have four calories per gram,” notes registered dietitian Courtney M. Sullivan, founder of Nutrition for Body and Mind (cwnutritionforbodyandmind.com) in Beverly Hills, Calif. “Healthy fats are important for a balanced diet, but moderation is key.”

2. Good fats can aid post-workout recovery.
In a University of Florida study, people who took a supplement that included an omega-3—found in fatty fish like salmon—had less inflammation after exercising. “Get some every day,” advises Sullivan.

3. Animal fats can raise the risk of heart disease.
In a recent case study from Walter Reed National Military Medical Center, a 39-year-old man who worked out regularly saw his LDLs (“bad” cholesterol) rise 55 points after he began eating more meat and cheese on the Paleo diet and then added a daily cup of bulletproof coffee (coffee laced with a tablespoon of butter and a medium-chain triglyceride oil). Bottom line: Butter, bacon, and fatty red meat are high in saturated fat, which can increase your risk of heart disease.

4. “Fat loading” for ultra-endurance isn’t ready for prime time.
The theory that high-fat eating lets you “tap into your body fat” for energy, saving carb stores for later or slowing their use during exercise, has had mixed results in human studies.

This article was in my N.A.S.M., (National Academy of Sports Medicine), magazine this month. The Training Edge, as the magazine is called, has great information for trainers like myself, to pass on to clients.

These four lunge variations let you target the glutes, quads, hamstrings, calves, and even strengthen knees inner thighs and hips.Lunges should be a part of your routine if you want to target the lower body.

“The lunge is a great compound lower-body movement that utilizes several muscle groups at once,” says Kathy Benson Zetterberg, NASM-CPT, CES, PES, GFS, owner of Fitness At The Lake in Lake Sherwood, Calif. Each version here starts with kinetic chain checkpoints in alignment: feet straight ahead, knees straight, and the lumbo pelvic hip complex in a neutral position. Perform an equal number of reps on each side.

Reverse Lunge
Good for beginners.
A. Take a step backward with hands on hips, core engaged. Bend both knees until front thigh is parallel to floor and back knee dips but doesn’t touch the floor.
B. Press through front heel and push off with back foot. Finish with feet together, pressing hips forward to engage glutes.

Front Lunge
Targets glutes, quads, hamstrings, calves.
A. Engage core and place hands on hips, then step forward. Don’t let back knee touch floor; continue to full range of motion if no compensation patterns are evident.
B. Push through front heel to return to standing; end with feet together, squeezing glutes.

Frontal Plane Lunge
Targets gluteus medius and gluteus maximus.
A. Step to the side with a wide stance, keeping kinetic chain checkpoints in alignment.
B. As you step sideways, the hips slide back and down (the bottom of the move looks like a squat with a kickstand). Keep opposite leg straight, feet and knees in alignment. Press through the heel to shift back to the starting position.

Transverse Lunge
Added benefits for inner-thigh muscles and knee and hip extensors.
A. Pivot left foot while the right leg steps out 90 degrees to the side. As the right leg lands, the left knee drops and heel raises.
B. Push off with the right leg, pivot back to the starting position.

Today I biked from Verona, Wisconsin to Mt Horeb. Mt. Horeb is called The Troll Capital of the World. We have all seen them in front yards, gardens, even on television commercials. Some people have gone as far as kidnapping them and sending pictures from different locations to the bewildered owners.   Crazy kids.

The bike ride over was beautiful! After about twenty minutes of pedaling, I was outside of town and into rural farmland. 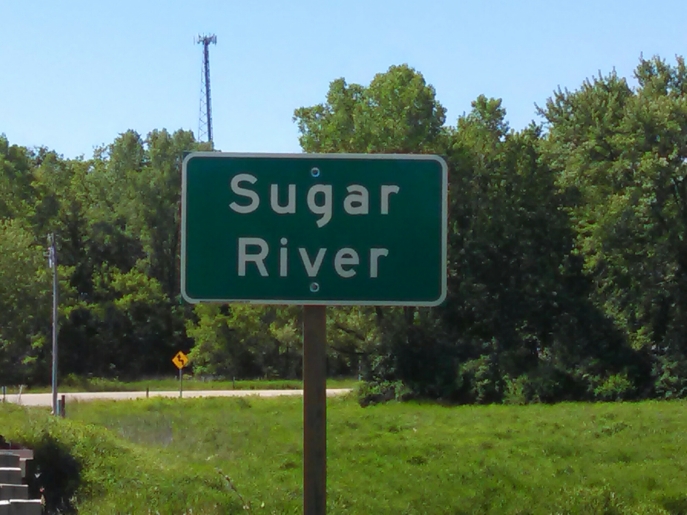 Yeah , you could say it was a sweet ride. Some of the route was on the Military Ridge Trail, partially paved and some dirt. 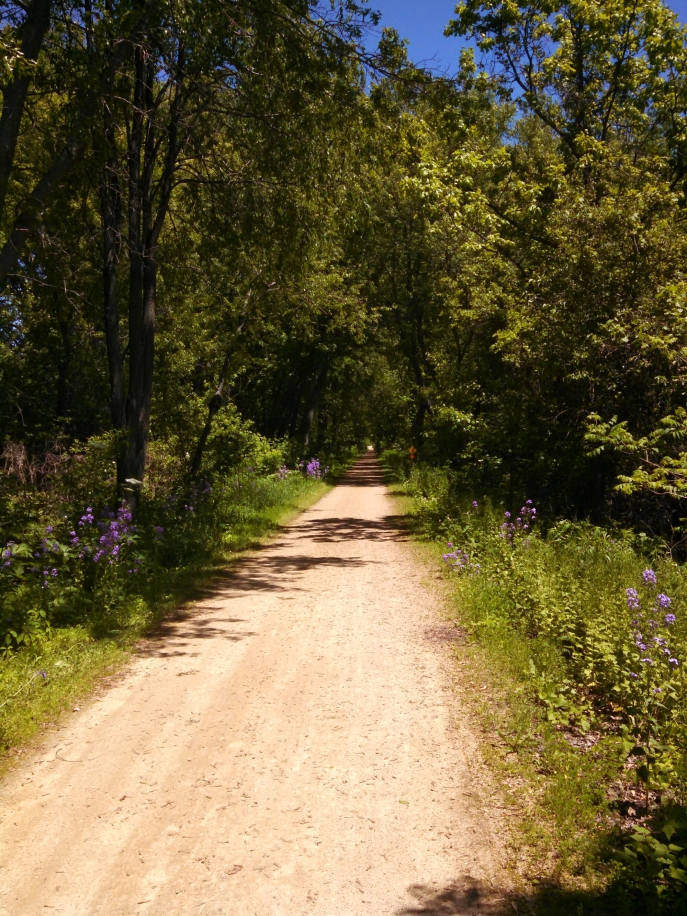 As soon as I got into the heart of Mt Horeb, the trolls made their presence known.

Trolls of all shapes and sizes adorned yards, businesses, and of course T shirts.

It seems as if they have their own mayor holding the key to the city.

One of the largest gatherings of trolls was inside Schubert’s diner. I was directed there when I asked about a good local spot to eat. I was not disappointed.

It was a step back in time. Burgers, malts, pies, you name it. However they put a spin on it. Not your typical grilled cheese or hamburger here. I ordered the Schubert Burger.

A beef patty served over Gorgonzola, hash browns and bacon, with a sunny side up egg over the top. Okay, I had found The Grail. This monster was a foodie masterpiece! I did second guess my choice about half way through, thinking about the bike ride back. But those thoughts diminished as I continued devouring this concoction of genius.
Probably the hardest decision was to pass on dessert. An old fashioned malt, A&W Root beer float, or a flaky, sugar sprinkled Rosette with a drizzle of chocolate syrup? Tough call to make.
So, I jumped on my bike and made my way back. This was an awesome trip, and I can honestly say that the Schubert Burger was incredible!

So if you’re ever out biking around the country and happen to see a troll, and run across a burger topped with an egg, you may find yourself in good company.

This week I am fortunate enough to be in Verona, Wisconsin with my wife while she is at EPIC’s Intergalactic Headquarters.
Since she had to come up for some certification schooling, I took the opportunity to bike some trails in the area.
The beautiful rolling hills that were left after the glaciers came through, make for some awesome country.
The area between our hotel and the compound at EPIC is very bike friendly, so I ventured over.

The roads are for the most part lined with bike lanes and intersect with these paved trails.

It was only 10 miles to EPIC and my wife was breaking for lunch when I got there, so she was able to show me around a little.
We came across a couple of food trucks so I decided to grab a bite before I headed back out to continue biking.  There was a Thai truck that caught my eye instead of the usual brats, potatoes, mac n cheese style offerings.

This was an excellent choice! The Curry Tofu rice bowl had mango on top and was sprinkled with a chilie salt. The pork Bao had a cloud like texture, and it was all washed down with a Thai iced tea.