Most of you already know that I had been planning to ride in the Bike MS: Central Ohio Challenge (COC) again this year.  The COC isn’t just a challenge of endurance; it’s a challenge to fight the damaging effects of Multiple Sclerosis and end it forever. This was to raise funds to aid in the effort of the over 15,000 people living with MS, in Ohio alone.

This also supports 24 researchers currently working on 25 projects. These projects are conducted by the Cleveland Clinic Foundation, Case Western Reserve University, Athersys Inc, Ohio State University, and Kent State University. Total funding for these efforts is $8,975,200! The funding covers projects from July 2012 through June 2019. As of the beginning of the ride, I had only raised $100, with a minimum of $150 needed to participate. I had paid my entry fee, made a $ 35 donation and raised $65. Any balance would be applied to my credit card, which I had to sign for prior to riding. My riding partner, who I also rode with last year, heard I was short of my goal, and put in $50 after the ride. He had already raised his funds. Donations are still accepted through August for those who considered donating or still wish too.

We had rain for the days leading up to the ride, with the possibility of a window of sunshine on ride day. Saturday morning was in the low sixties when I got up at 5 am, (yawn). Coffee, oatmeal, fudge PopTarts, (pure sugar carb), a shower and I was off for registration.

As my wife and I headed out, the sun began to rise, what a beautiful sight it was! We were blessed with perfect riding conditions for the day. As we pulled into the parking area, my wife and I were greeted by my friend Mike, whom I had finished the ride with, the year before. I went inside, picked up my packet, bib number, and T-shirt and headed back out. 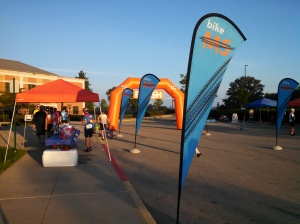 Mike was anxious to get on the road, due partly to the fact that it would be hilly terrain and he had some medical issues since our ride last year. The course was open at 7 am and we were to be finished by 5 pm that same day. I had heard that there were 250 entrants, with courses that were 35, 50, and 95 miles in length. We would have rest stops with water, Gatorade, fruit, snacks and toilets, every 15-20 miles, a lunch stop at about 50, then two more stops before we would cross the finish line. 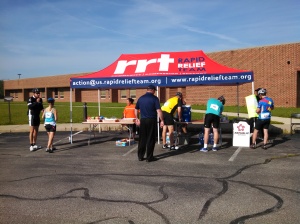 The stops were set-up well and always a welcome relief. A chance to grab a banana, a Special K brownie, (one of my favorites on this ride), chips, cookies, a drink, and look at the mapped route. Once refueled and stretched, we would mount back up. 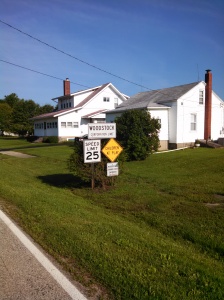 We went through rural towns, such as Woodstock, (Ohio remember), and past soybean and corn fields. We saw some beautiful country along our route.

One of our stops was setup next to a true farmers market. 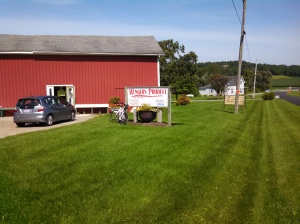 It doesn’t get anymore Americana than that. As we headed on towards Bellfontaine, home of the First Concrete Street in America, and highest elevation in the state, we began to hit the hills.

This looked like it was going to be a steady climb, and as we topped the first crest, we saw that there was more to this than met the eye.

We made it of course, but the elevation changes were taking a toll on my friend. We ended up in a group of four other riders, who had also committed to the 95 mile course. It was soon becoming apparent that the higher points were now upon us. 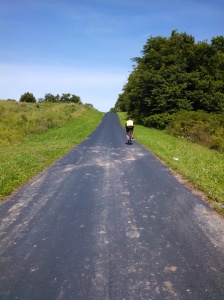 Some of these hills were now demanding that only the strongest of cyclists would pedal to the top.

The views were spectacular however.

At one point, on a stretch called The Corkscrew, I dropped into my easiest gear and the chain bound up between the frame and gears. Being clipped in to the pedals at this point is not a plus. Down I went. I unclipped, got up, brushed some gravel from my knee and got back on. A little pride bruising and some soreness, but I was okay. I was committed to own this hill, just as my friends were committed to finishing the course. I don’t know if you can imagine the amount of pride I had, to be a part of the group of riders that would finish this ride dead last. We all knew it, the motorcycle escort had been behind us for some time. We all knew inside of us that what we were going through was nothing compared to what those who suffer from MS or have lost a loved one because of it, go through everyday.

My friend kept telling me to ride on without him because he didn’t want to hold me back, but I had told him that I would cross that finish line with him. We both knew my average speed and his were different, our age span is twelve years, I work out daily and am at 13% body fat. Throw a pacemaker into the bag of tricks and you get the picture. It wasn’t happening.

I rode back down the corkscrew and then back up it, coaching my fellow riders on. They of course said I was nuts and going the wrong way. All I could think of was Tom Petty, “I won’t back down”.

We made it up that hill and every smaller one after that. It wasn’t too long before the scenery became a little flatter and started to become more familiar. The scenery was truly remarkable. 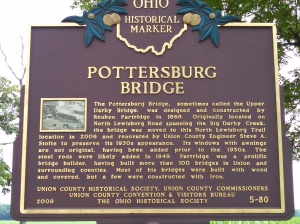 One of our last stops was at a covered bridge, of which Ohio has many. 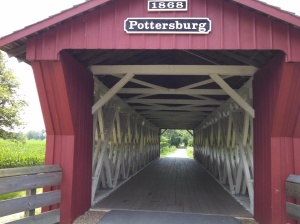 To bring this to a close, We had conquered what we set out to do. My friend asked for some personal trainer advice and I gladly gave him some. I also told him that I hoped that we would conquer next years course together as well. It wasn’t a race, it was a ride. It was a time of sharing, camaraderie, some pain and some laughter. 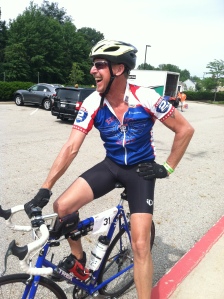 We crossed that finish line together, and I look forward to writing a similar story next year at about this same time.

This story goes out to my friend Mike and his pursuit to raise awareness towards MS, my friend Amanda who suffers from MS, and my newest supporter and sufferer of MS, Danny. I thank each one of you for what you do and endure.