And a meal is born! My wife informed me the other evening that I was preparing fish and asked how I was serving it. I hadn’t a clue other than ‘to cook it’.

Usually it involves lime juice, cilantro, garlic, some oil, my go to stuff. I wanted something different and remembered the fresh ginger. That’s when it hit me.

I sliced off three thin slices of ginger root, trimmed and minced them, grabbed the sesame seeds, some cayenne pepper flake, coconut oil and the pound of tilapia.

I put about a tablespoon of the coconut oil in a skillet and let that heat up. I then added a Tbsp sesame seed, the minced ginger and a couple shakes of the red pepper. This cooked for a couple of minutes, just long enough to make a beautiful aroma, and the ginger and sesame started to darken a little.

The tilapia fillets were laid gently over the bed of seasoned goodness and cooked for about three minutes per side.

This was served with mixed vegetables that were rather boring next to the fish.  Last minute thought, remember?

So there you have it, a quick, simple, healthy and nutritious meal that was thrown together in under twenty minutes. Now what am I going to make tonight…? 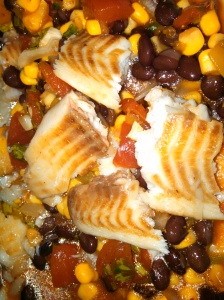 This amazingly simple, healthy and nutritious dish was originally put together as a dipping salsa. However, when it came time for dinner, it was warmed and served as a bed for grilled tilapia.

I threw all of this together and let it chill in the fridge. It definitely was not one of my most thought inspired dishes but it turned out very nice.