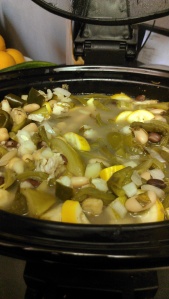 I received a phone call this morning to inform me that my patio door would be replaced this week. This is great news! The bad news is that I also discovered the manager of the complex I live in is sick today.  She sounded pretty bummed about feeling ill, but looks forward to being a test subject for my recipes. Being the kind of guy that loves to throw stuff together on the fly, I made her a bowl of soup.

I grabbed a small sauce pan and melted a little butter in it, tossed in some fresh minced garlic and onions, and browned them. Next I poured in a cup of low sodium chicken broth and brought it to a boil.

While that continued to simmer, I peeled and cut thin slices of carrot and Chayote squash and added them to the broth. I only used half of the carrot and half of the squash. You can substitute sweet potato for the squash. I then cut a Portabello mushroom and tossed it in. There was some leftover Red Cargo Rice in the refrigerator as well, so I threw in about 1/3 cup.

The seasonings were unmeasured, but were a sprinkle of cumin, coriander, sea salt, thyme and powdered ginger. I contemplated a dash of brown sugar but felt it was not needed. If I had a little chicken leftover, I would have added that also.

She was showing a property when I left it on her desk, but I am confident it will pick up her spirits. Many people overlook the simplicity and speed in making a pot of soup. Don’t be mistaken, I make a chili verde that simmers for three days. Not everything needs to be complex or drawn out.

Just like exercise, begin with a base and build from there. Once you know the basics and begin to gain confidence in your progress, you can add to your routine and increase your self worth. There is no need to make food or exercise any more complex or time consuming than you want it to be.         In fitness, Bob

2 thoughts on “Soup is Simple”